Euromoney Institutional Investor HQ in Boverie St London gets a lot of visitors coming through reception and while it’s a pretty nice reception and there’s streaming Sky News to watch, we thought we could improve things a bit.

We’ve got that spare screen in reception that’s not being used and we’d like to do something nice with it, give our guests something useful to see and perhaps something about the company.

It’s not often you get fun projects through the door or ones that don’t have a tight deadline so this one was popular with all the team. So we put our heads together and worked out some basic personas of the most likely visitor types, what they would be interested to see and what would be helpful for them to know.

The first thing to become clear was that publishing company case studies or anything that would remain current enough came with an overhead of content management that would have to land on someone’s shoulders so we had a chat with the guys in facilities and agreed to focus on existing sources of data that were, let’s be honest, managed by someone else. Also let’s face it, if you’re in the company HQ you know where you are and what they do, at least in the broadest sense.

So the focus was on anything useful we could lay our hands on and perhaps some level of entertainment and at little to no cost. We kept things simple with entertainment, sure there’s Sky news, but it’s one thing at a time, so let’s build off that and provide some rolling news headlines.

In the end we found an API for aggregated news sources that could be selected on first load of the page. TFL was there to provide tube and bus info to help our visitors when they leave and looking out the window we noticed the long line of bikes, delving into the API it turns out you can track those as well.

We also didn’t want our visitors getting caught in the rain so we pulled in that info as well. We even put a CSS powered clock up there since no-one had thought to put a real one up anywhere. In the end it was space that stopped us going overboard.

And since it was quite useful we made sure that while it’s designed to work with the TV display, it was also responsive so any of our employees could check on those things as well. Then it was just a matter of getting a machine in reception, a bit of wiring and plumbing in a CI pipeline. Oh and we put in a client side check for deployment to ensure we didn’t have to bother receptionists every time we wanted to update it.

In the end it’s turned up on various screens around the building, which should say something about it’s success. 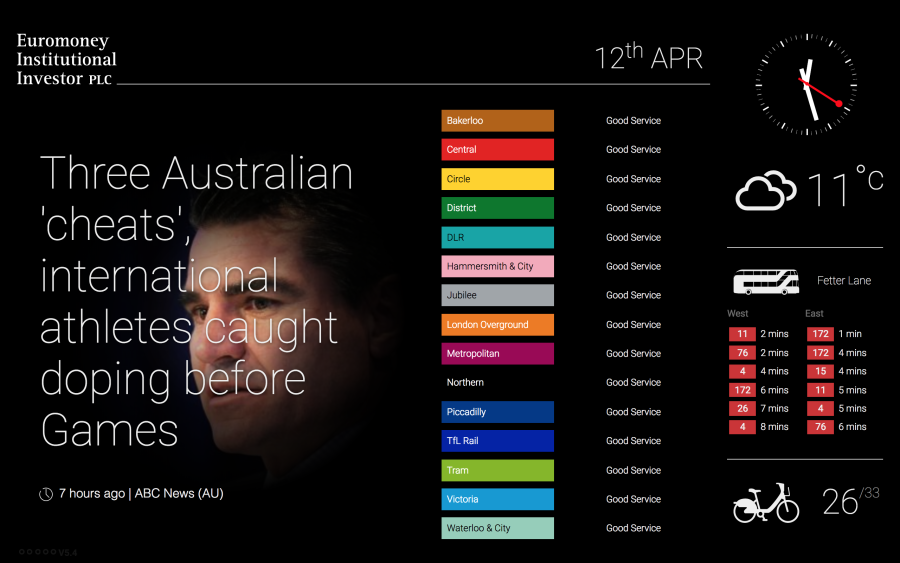